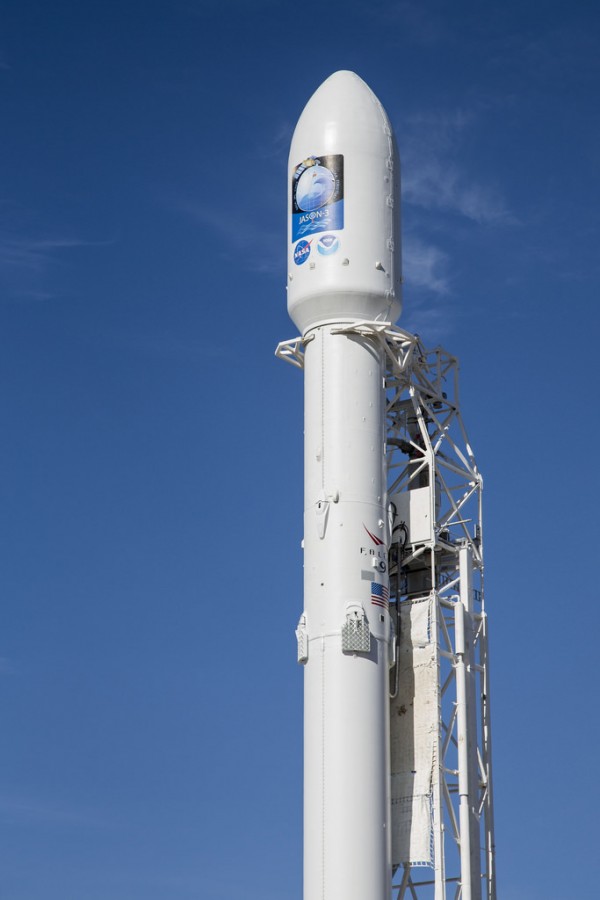 SpaceX Falcon 9 with the Jason-3 satellite on the launchpad at Vandenberg Air Force Base, CA.

SpaceX launched one of its Falcon 9 rockets on Sunday, January 17 at 10:42 am from Vandenberg Air Base in California.

The rocket’s primary mission was to send the NASA satellite Jason-3 into orbit. A “secondary test objective” (according to the SpaceX press package) was to land the first stage of the rocket back on a barge in the Pacific Ocean, completely intact.

Approximately an hour after takeoff, the Falcon 9 successfully released the satellite into a polar orbit, 830 miles above the Earth. The purpose of Jason-3 is to monitor global sea-levels and temperatures. The highly precise instruments in the satellite can also be used to forecast weather events and research marine ecosystems.

Sunday’s launch was SpaceX’s third failed attempt to land a booster on a drone ship according to HuffPost Hawaii. The first stage of the rocket successfully touched down on the SpaceX autonomous drone ship “Just Read the Instructions”. However, one of the landing legs did not lock in place and the booster toppled over.

Elon Musk, the CEO of SpaceX (as well as Tesla Motors), posted a video on Instagram of the Falcon 9’s attempted landing.  Referring to the landing leg failure, Musk wrote, “[The] root cause may have been ice buildup due to condensation from heavy fog at liftoff.”

A Falcon 9 booster did land successfully (on the ground) last month on December 21 at Cape Canaveral Air Force Base in Florida. The rocket carried a payload of 11 ORBCOMM communication satellites to low earth orbit.

SpaceX rockets cost between $60 and $90 million, not including fuel costs. Landing a booster safely and reusing it could allow the cost of space travel to be “reduced by as much as a factor of a hundred,” said Musk. Despite their recent setbacks, SpaceX’s “ultimate goal of enabling people to live on other planets” (according to the company’s website) may not be so far off after all.