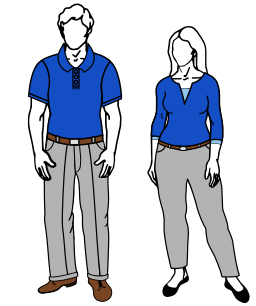 The CAHS dress code has long been a point of contention among the student body. Feedback from students has resulted in administration revising the code, such as last year’s lift on unnatural hair colors.

Courtesy of Elka, Themightyquill and Nicoli_Maege from Wikiemedia Commons, used under the following lisence: CC BY-SA 3.0.

Over this past summer, the code was updated again. During cohort on Tuesday, Sept. 6, all female students were sent to Caiman Hall for a clarification of this year’s updated dress code, which has been relaxed to include any non-see through shirt with shoulder straps, though showing regular bra straps are the exception.

At the Q&A held after the debriefing session led by female ASB members, multiple students stood up to express their frustration with the way the information was presented, which led many female students to feel discriminated against for the way they dressed at school.

This belief was also fueled by the fact that there were no boys in the room; ASB had thought it best to segregate the girl students from the boys so they could talk about things like bra guidelines and sort out other details or exceptions more freely.

ASB member Erin Collins, who was present at the assembly, said, “We knew that we wanted to have one just for the girls, so it was originally two separate assemblies.” ASB had decided to inform the girls first, then the boys the week after.

However, at the time, there was no indication if the boys were being talked to about dress code at all, and so, to some female students, it seemed like the girls were being singled out. This resulted in some heated speeches from the girls in the audience who spoke up during the Q&A.

Other students did not find anything wrong with the dress code. Junior Brooke Swanson said, “Our school’s vibe is classy. … I feel like this is a tiny little step, and once we start taking little steps, then our school’s personality is just going to go away. … Things that they become lax about start to turn into … more corrupt areas.”

Most students simply found the way the matter was handled by ASB discriminating if unintentional. Sophomore Paige Townsend said afterwards, “I think that the fact that we can’t have our bra strap showing is reasonable … but the way that they handled it and how they couldn’t have the boys in there because the boys can’t handle the word ‘bra strap’ is … absurd … they should have addressed the boys as well.”

Some weren’t bothered by the all-female assembly at all. “I thought it was good that it was all girls … [if the boys] had been there it would have been more controversial … and awkward,” said freshman Brady Bateman.

Freshman Andy Radsliff agreed that she liked the way the assembly was handled overall, though she said she does not believe in “protecting the boys because they should learn to respect us.”

The school administration sent out an email the day after the assembly, stating that ASB would also hold a dress code discussion with male students.“The decision was made to have two separate meetings so that students could be honest and ask any clarifying questions,” the email said, “As with any policy, there will be some pushback, but CAHS remains steadfast in holding the standard high for how students dress while at school. The school dress code … is designed to allow students much freedom in how they dress within some specific parameters of modesty and safety.”

Nevertheless, the school administration currently remains firm over upholding the new dress code, and the extent of student dissent as well as potential reforms remain to be seen.