Turkeys (students) turn the tables and roast the Pilgrims (teachers) 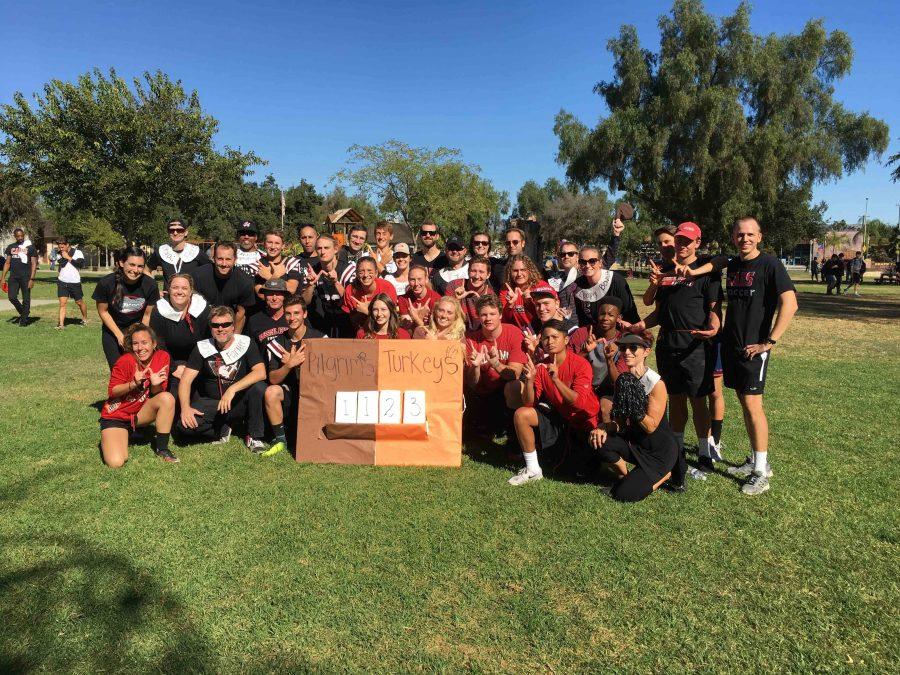 On Nov. 18, the student team—the Turkeys—faced off with their teachers—the Pilgrims—in the annual Thankskicking Day kickball showdown.

The rivalry was intense; the teachers had won for the last nine years in a row and were going for another victory, bantering with their students the morning of the match. But this year, the students turned the tables on their teachers and emerged victorious, kicking off Thanksgiving break with their first-ever win at a score of 23-11.

The Turkeys’ triumph shocked many, including several of the students. “I was actually pretty surprised, because we have never won,” sophomore Colette Breda said.

The results elated many students, including senior Sydney Johnson, who cheered on her teammates from the sidelines. “That was awesome,” Johnson said after the game. “We’ve been waiting for so long for this moment. Definitely well deserved. We had a great team out there; everyone was doing great.”

The Turkeys developed a lead early in the game, but with history on their side, the teachers were still confident that they would win. “We’re just a pretty athletic bunch,” Biology teacher Mrs. Benattia said.

Although the students were already solidly ahead by the halfway point, Sports Medicine teacher Ms. Kaitlin Gates still had faith in her team. “I think the teachers are going to come back,” she said. “The students are putting up a fight though.”

“I think the game’s going pretty good—for the students, at least,” freshman Samuel Schaefer remarked mid-way through the game. “From what I’ve heard, the teachers have [in the past] been dominating [the] students.”

This year’s student team, however, had stronger kicking skills than previous years, and many of its members were soccer players. “[The] teachers were better at outfield,” sophomore Lindsey Allen said, “[but the] students [were better at kicking].”

A cheer rose up from the spectating students as the final inning came to an end, and, with it, the Pilgrims’ undefeated record. Confident that the teachers’ streak is broken for good, Allen predicted, “We’re going to win every single year now.”

However, English teacher Ms. Dunton had a different view. “The teachers lost for the first time, and the last time ever … But, you know, [the students] need the win because they are not going to have many happy moments in life, so at least they have this one,” Dunton said jokingly.

EDITOR’S NOTE, 12/6/16, 8:20 p.m. PST: An earlier version of this article stated that the Thankskicking game took place on Nov. 19, which is a Saturday. This has been changed to the actual date the event took place: Friday, Nov. 18.