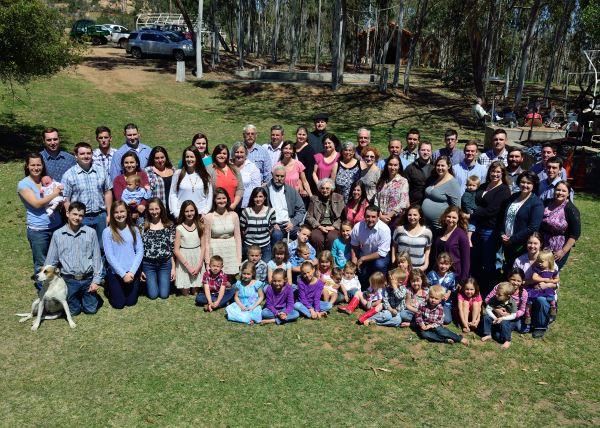 Jauregui and her extended family on their ranch.

“Have you seen ‘Cheaper by the Dozen’?”

Sophomore Christina Jauregui is no novice to the trials and blessings that come with big family life. Don’t believe me? Let her 14 siblings speak for her. Which they do, constantly.

“A lot of people say I’m loud because I don’t get enough attention from my family, so I have to yell to get my point across,” Jauregui said. “But, I mean, I get a fine amount of attention, I guess. I’m good with what I get.”

Her roll-with-the-punches attitude derives straight from her position as the twelfth child in the family lineup. Every child has their role, and Jauregui accepts hers as the family mediator. “I’m the blunt one and the one who everybody tells all their secrets to, because I’ll tell them straight up how it is. And I’m the neat freak,” she adds. “I try to keep everything clean,  [which] works for about a day, and then the next day I wake up, and it’s … madness.”

While Jauregui’s childhood led her to believe that such a large family was normal, Jauregui later realized that what she was part of was anything but conventional. “[I was] 6, and when I started going to school … everyone would know who I was … like ‘You’re a Jauregui? Oh! You’re in that family of 15!’ [T]hen I realized how crazy it was to other people, and I realized how big of a family I had.”

Despite all of the madness that comes with a more-than-full house, the Jaureguis still find time to come together and enjoy each other’s company. “Every Sunday, we have family dinner. Each person’s assigned a main dish. We all get together and have dinner and catch up on life.”

If Jauregui’s 17-member family doesn’t sound crazy enough, just wait till you hear about the rest of her relatives. Jauregui lives on a ranch in Valley Center that has belonged to her family for several generations, surrounded by “about a hundred [of her aunts, uncles and other relations].”

“I have, like, 60 cousins,”Jauregui  said. They prove quite the crowd, especially during holidays and other celebrations when they “all get together at [their] park, have a huge potluck, play games like capture the flag on the grass and have a rockin’ time.”

When asked about the best part of having such a big family, Jauregui is quick to answer. “Probably just having someone to always go to, because you’re never alone,” she said. “You need a lot of patience with a big family, and you need to get over the fact that your house is never going be clean and [that] you’re never going get the good foods you want because everyone eats them within the day your mom buys them. But [having a big family is] great; it’s fun—you always have something to do and there’s always someone to talk to.”