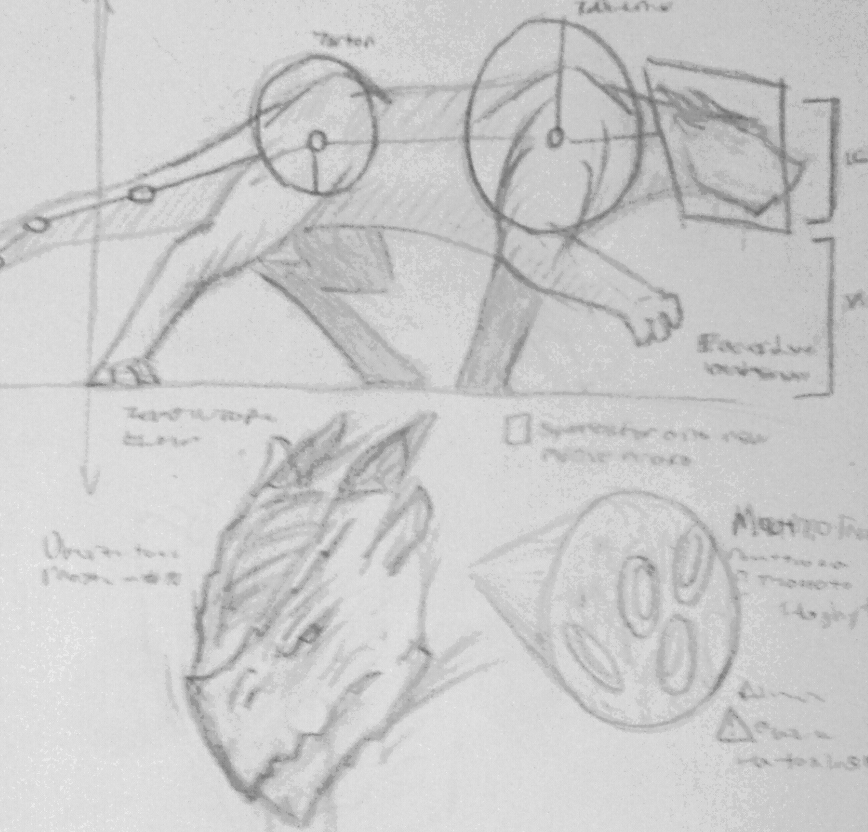 Camera starts to roll, coming into focus on a charming young reporter in front of the fuzzy background of a looming building. A brief pause: she smiles graciously, one hand raised to her ear.

Action. “Thanks, Debbie. As you can see, it’s a very important day here at the World Conservation Commission headquarters. We’ve seen scientists arriving this morning from all parts of the globe for the convention scheduled today, hoping to finally find a solution to the Firedrake Problem once and for all. Dr. Abram Martin, one of the head researchers on this dilemma and leading firedrake expert, is here with us today to talk about the convention. What can you tell us, Dr. Martin?”

The microphone extends toward a tall, pale, dark-haired man in his late thirties. He lowers his head toward it in an almost birdlike posture, his hard eyes never leaving the camera, his words slow and deliberate.

“Well, Michelle, as you said, it’s an exciting day for us. All the biggest ecologists and conservationists in the world are here to put their heads together on this … problem.”

“And I’ve heard that your department is planning a new proposal to deal with the situation. Can you tell us anything about that?”

His hands begin to move, eyes never breaking with the camera. “Well, I can’t get into details right now, but we think we’ve found a pathogen that will counter the neurotoxins the Drake Flu virus releases, allowing us hopefully to halt the decimation of the firedrake population. Today we’ll discuss this proposal and some others from top scientists and decide which course of action is best.”

“Thank you so much, Doctor.”

The reporter again faces the camera, smile unwavering. “The so-called Firedrake Problem began seven years ago when the Martian species was first unintentionally introduced here in Yellowstone. Within weeks, their presence caused an upheaval in the North American biosphere.”

Cue montage: images of maroon-skinned, wolf-like, reptilian beasts with leathery hides, hunched over bloodied prey, stalking through bushes. There’s one of a ranger perched with one foot on a scaly carcass, a rifle in his hand and a proud grin on his face. “The WCC enacted numerous programs to decrease the firedrake population, and for a time had great success.”

The images change to scenes of blackened, gnarled forests and famous pictures of hikers with horrendous burns. “It wasn’t until then that scientists realized how important the drakes had become. Glomerorum ignus—or as it’s commonly known, Martian Fire—is a deadly, invisible fungus often found on the skin of firedrakes, and the burning toxins it releases on contact lend the creatures their name. Firedrakes also eat Martian Fire, and when their numbers declined, the fungus spread like, well, wildfire.”

The pictures fade, and the reporter returns, no longer smiling.

“Since then, efforts have been underway to save the species from extinction. Scientists hope today to find a solution that will bring back the drake population to a manageable level. The question many of our viewers want to know then, Dr. Martin, is this: Why, after seven years of difficult and, frankly, very expensive measures to fix this problem with questionable success, do the WCC still think they can solve it? What makes you think this time will be different?”

Martin’s eyes break away for a second and roll to the right, like he’s annoyed by the question, “Well, yes, Michelle, we have made some mistakes along the way, things that, in hindsight, I wouldn’t try again. But the important thing here is that we learn from our mistakes, and that we—and I mean as a community, as a species—do everything we can to safeguard this Earth we’ve inherited.”

“And what do you have to say about the protesters out here today?” The camera pans away from the doors, toward the clusters of people on the sidewalk waving signs and chanting almost audible rhymes. Cue splitscreen: on the right appears a live feed of marching college students and park rangers shouting silently, waving signs that scream, “You’ve done enough!”

Another flicker of annoyance, “I appreciate their concerns, Michelle, but as the most advanced species on this planet, it’s our duty to—”

“Duty!” A harsh voice cuts in; the camera shifts to accommodate a gruff middle-aged man with a short, salt and pepper beard and wild eyes. “He says it was his duty! To waste dozens of lives? To—”

“Don’t try to justify yourself to me, Martin! I was right; why couldn’t you listen to me?”

“Excuse me, Michelle.” There’s ice in Martin’s eyes as he grabs the man and steers him away from the camera, toward the building. “Let me handle this, quickly.”

The camera pans back to the reporter, ears perked in curiosity; she nods almost imperceptibly and follows at a distance, the camera bouncing behind her. She reaches the door the pair passed through just moments before and peeks around the corner, then at an offscreen gesture, the cameraman goes ahead, peering down a long hallway at the two figures, and zooms in.

The words echo down the hall, “Are you happy now, Martin? Have you caused enough suffering for one decade?”

“I don’t know what you’re talking about, Warren—”

“If you’re referring to the efforts this department has taken—my efforts—to save this hemisphere, then you’re the one who’s blind.” The doctor’s voice is cold—quiet, but not soft. “The firedrakes posed a threat not just to the environment, but to life as we know it. I took the most logical action—”

The man turns around, scoffing. The camera zooms more; on his drab gray jacket, a worn ranger patch can be seen.

“That’s the crux of the problem though, isn’t it? You took action.” His voice rises in pitch to the very edge of mania, “You saw the drakes killing a few rabbits and deer, and maybe a bear or two—”

“—And you thought, ‘I’ll fix this. I’ll play god!’ And what did you do? You paid subsidies to hunters to kill the firedrakes. Headlines: Seven killed in drake-hunting expedition gone wrong. Drakes begin attacking hikers, rangers, hunters. Drake sightings in suburbs. Now it’s everyone’s problem.”

“You can’t possibly blame me for the heightened aggression. It was only a matter of time—”

“So what did you do? You hired professionals.You had the rangers do your dirty work. You said it was the only way. Young men, some no more than boys, with families and futures and faith in the world, marched off to be gored and torn to pieces.”

“Their loss was a tragedy, Warren, but—”

His voice becomes deathly quiet, “Do you know how many died?”

“Twenty-seven. Twenty-seven in all, sent on missions ‘gone wrong’ by your department, missions to hunt the ultimate hunters, to kill the perfect killers. And what good did it do? How many drakes did they bring you, huh?”

“That information is none of your concern, Warren. But I assure you, the elimination program was thoroughly justified, as was my decision to terminate it.”

A derisive snort. “Justified! Even now you can’t admit that you were wrong! But you came to your senses alright. So what did you do? You created a germ to kill the beasts instead. The Drake Flu.”

Annoyance creeps back into his voice, “I never created anything. It was already a common disease among native drakes on Mars. We simply brought it here.”

“I don’t care where it came from! A new disease! What could possibly go wrong?”

“Extensive tests on Mars showed it—”

“Could not spread to humans or other local species, yeah, yeah, I know. We’ve all heard the spiel. Guess what they didn’t test it on, on Mars.” He ticks them off his fingers. “Tortoises, rattlesnakes, songbirds, motherf***ing cats! There are no more cats in North America, Martin! Open your eyes!”

Martin doesn’t respond. His shoulders turn and he stalks toward the wall, his eyes skittering madly across the bulletins as if they hold the answer.

“And now, the Martian Fire. The icing on the cake. All of it, everything you did, all the people who lost their lives, it was in vain. You don’t want the drakes dead. Turns out, you need the drakes.”

“What did you want me to do, Warren? If I’d listened to you, the drakes would have wiped out entire species.”

His hands fly to his head, his voice incredulous, as he runs them furiously through his hair, “Don’t DO anything! You had NO IDEA what you were doing! You can’t—”

“You can’t control these things, Martin! You think you have science to guide you, but you know such a tiny fraction of the way the world works! ”

The doctor finally snaps, “You don’t get it, do you? We made this problem, and now we have to fix it! I can’t just sit by and let the mistakes we’ve made tear our world apart! We just have to—”

“But you can’t, Martin. How many times do you have to try before you get it through your thick skull? You can’t fix a broken world, you can only make it worse.”

“You’re not a scientist, Warren. You don’t understand how—”

“Tell me, then. Tell me about your new plan. What do you think will happen when you release that pathogen?

“No, don’t answer. Don’t give me the spiel. I’ll tell you what will happen. It’ll be something you never expected, never even thought to fear, but it will happen. You will make it worse.”

Silence. Martin’s back is turned; the mikes just barely pick up, “I think it’s best you leave, Warren.”

“Why won’t you listen to reason, Martin? But what did I expect? People don’t change.”

Another whisper, “Get out.”

The ranger starts as though struck, and, taking one last hurt look, turns slowly down the corridor to leave. He takes three steps and stops. His fists clench and his voice cracks slightly as he says, “They had names, you know.”

“I’m sorry?” The voice is totally devoid of emotion.

“The rangers. Some of them were my friends.”

“Anthony Salvato.” He spins around, clutching his throat, and mimes choking, “Spore poisoning. We didn’t know what it was back then. Six days writhing on a hospital bed.”

“Jeremy Carwell.” He pounds his fist on his chest. “Beast crushed his rib cage. At least it was quick.”

Martin turns his back on the ranger, walking callously back toward the camera. “I don’t have time for this. I have a hemisphere to save—”

“Diego Gonzalez,” he continues, his voice rising hysterically as his audience departs. He rakes his hand across his face, “Eyes clawed out of his skull! I watched it happen! Eric Martinez!”

Martin reaches the door. His icy eyes pierce through the camera, straight into every soul in America. Michelle makes a brief appearance in the peripheral, springing to ask a question; his arm pushes her aside and his lips, trembling in fury, hiss, “You’re trespassing on government property.” An electric pause.

Then everything goes black.