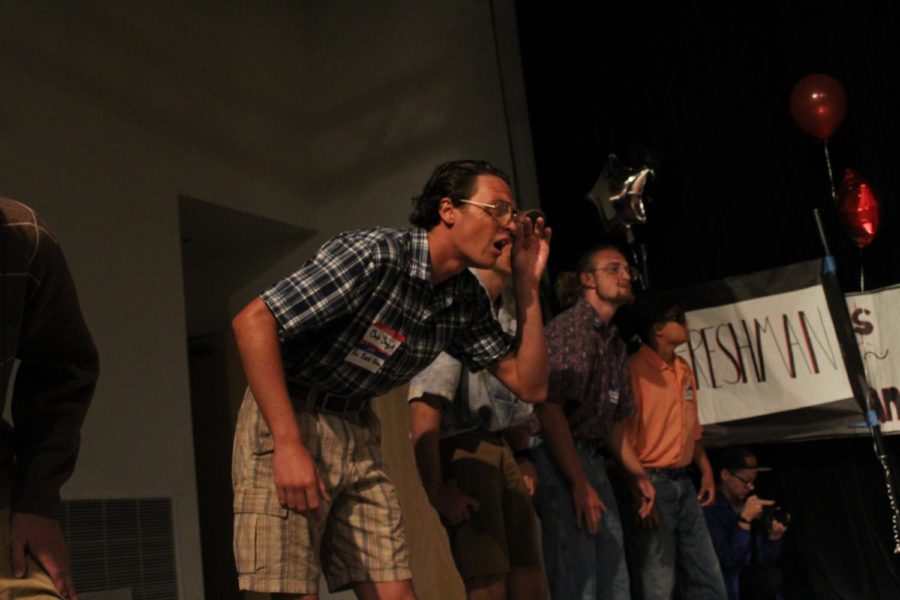 Zane Moore and Jake Gilbert dress up as senior citizens for their featured dance during the pep rally. Photo taken by Zoe Giammaria.

Students filed into Caiman Hall last Friday, speculating on what this year’s assembly would bring. Anticipation for the next day’s homecoming dance was high, and the pep rally only added to the enthusiasm.

The Homecoming Pep Rally offered many games and events that got much of the student body to explode with laughter. Filled with teacher dances and exciting routines from dance and flag, the pep rally was bursting with school spirit. The pep rally occurred on the same day as the final spirit day of the week, so nearly every student was decked out in red and black attire.

Both the teachers and the students showcased their hidden talents by choreographing and dancing to their own routines. The teachers showed off their moves dressed in 80s workout attire, and danced to an assortment of classic 80s songs. The seniors had their own moment in the spotlight as well, in a routine featuring several senior guys dressed as senior citizens.

Behind the scenes there was an abundance of preparation required to ensure that the assembly would go as smoothly as possible. According to ASB member Geneva Lindsley, the assembly had been slightly more difficult to coordinate? than previous years, since homecoming was earlier than it had been in past years. This pushed the assembly date up as well, so “everything has been a little more stressful this year.”  Although not all ASB members are delegated to work on the pep rally, Lindsley said that the whole class contributed with creating and setting up.

Presenting routines was not easy for the performers of the pep rally either. Junior flag team member Lydia Oven said that the team “learned [the] routine at summer camp, and [they] have been working on it since August.” Luckily it all paid off, as Oven thought the pep rally was really fun, with her highlight being the teachers’ dance and the announcement of the homecoming theme.