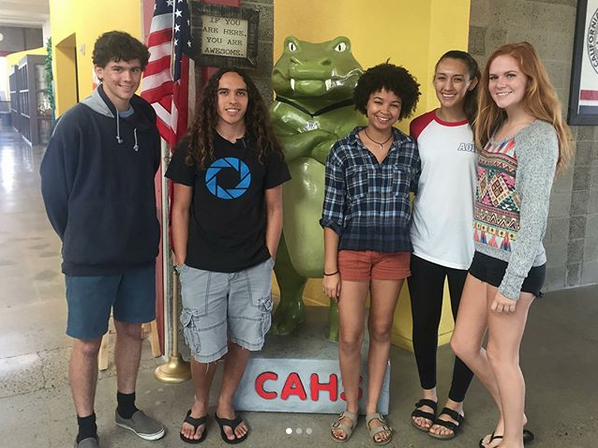 Offered by the College Board, the National Hispanic Recognition Program serves to recognize academically outstanding high school students of at least one-quarter Hispanic/Latino origin. Students of this origin are eligible if their score makes or exceeds the cutoff for the PSAT/NMSQT in their regions.

Senior Gabby Smith knew her goal going into the test. “When I went into the PSAT, I knew that I wanted to get either National Merit Scholar or National Hispanic Recognition or both … Once they notify you that you’re within their pull, then you just do [an] application that has to do with your grades, then they give you the recognition.”

With a PSAT score of 1430 and GPA of 4.2, Smith hopes that “whatever college I go to will give me money for this honor. Some schools have very generous [scholarships] where it is full tuition. It kind of varies, but I’m hoping to … stand out.”

The worst part for Smith was waiting. “It was stressful … You go on College Confidential and people are like ‘I got my letter two days ago,’ and you’re like ‘Oh my gosh does this mean I didn’t make it?’ Eventually it came, and I was really excited.”

Smith feels that NHRP has a deeper meaning than just an award. “I think that it is really important that it recognizes students that might have disadvantages because of their race or ethnicity… It is important to recognize people who have overcome things, and I’m happy to be a part of that.”

Senior Cameron Donez had a more laid-back take, attributing his high score to the ease of the test. “I ended up testing well … The PSAT just turned out to be really easy that one year.”

Donez equates the process to “a really short college application.” Though the NHRP is not a monetary scholarship, receiving the “weird award” has helped him considerably in the college application process. “Don’t treat the PSAT like it’s completely meaningless because it has the potential to do a lot for you in the future. I’ve actually gotten accepted to two colleges already with it, and they’ve both given me full ride [scholarships].”

Senior Sophia Mittman, the only Online student to have received the honor, hopes that it will help with college admissions. “It kind of would give me a little bit of an edge in some college applications because minorities are underrepresented.”

Mittman stresses the importance of thinking ahead. “Start looking now— don’t think you have time because it goes by much faster than you think … Start thinking about what you’re interesting in going into, and have a plan even if you’re undecided.”

Ultimately, senior Lucas Carrillo Salado, who also did not expect the honor, believes there’s more to life than academic honors. “It’s a big honor, but to me, I feel like scholarships and honors are decorations, really. It doesn’t really give face value until you go to college.”

Likewise, senior Eden DeLaVara advises other students to focus more on their outlook than on their accomplishments. “Don’t assume that you are not going to get the good grades. Don’t assume that things are going to go bad,” she said. “If you assume the best, your outlook on everything will change. You will be optimistic [and] be looking for ways to give back to your community. Stay positive.”