Be There Or Be Cube: Rubik’s Cube Club 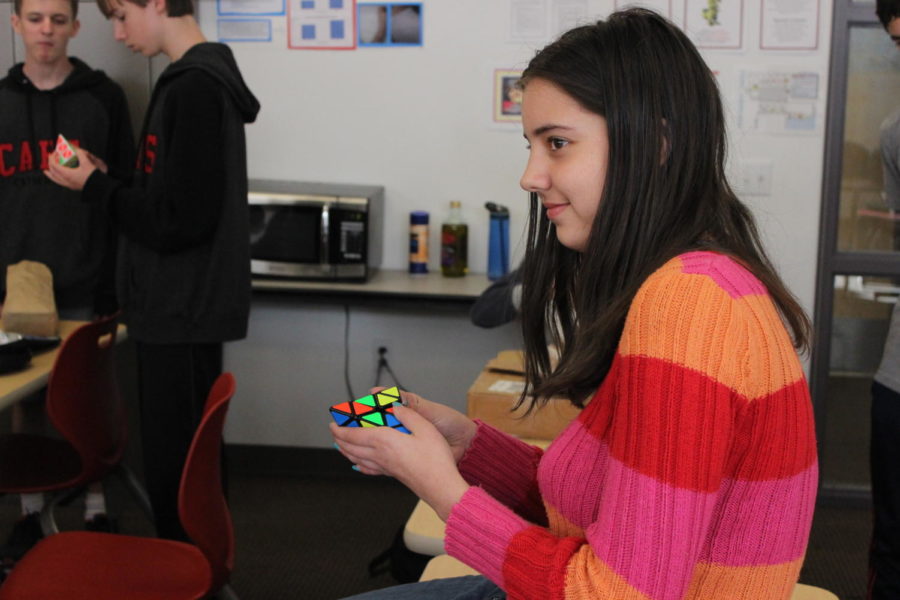 “The Rubik’s cube team has been around since I was a freshman, maybe even before that. I made it official,” president and junior Timothy Chang said.

“I wanted to get rid of a bunch of stereotypes that were floating around nowadays, [with] people saying, ‘Oh, to solve the Rubik’s cube you have to be super good at math, and you have to be really smart.’ You really don’t.”

To solve the Rubik’s cube, one needs to be familiar with certain solving strategies. Each cube requires a slightly different approach.

“The general approach for most cubes, in general, is to go layer by layer at a time, and then build your way up,” Chang said, “You don’t build it up layer by layer; what you do is that you return it to …  a cubic form and solve from there by starting both layers at once.”

Vice President Christopher Holland’s secret to success with the cube is pretty straightforward: “You just have to practice it. Either someone can teach you, or you can just look it up. But once you start and do it enough, it becomes easier.”

Holland and Chang had different reasons for joining. “I started Rubik’s cube during tech week in musical theatre in seventh grade, because I was bored, and I had an ensemble role, and I was like ‘I do not want to sit here for one and a half hours to wait for my one scene on stage; I am going to be productive’ … so I bought a Rubik’s cube,” Chang said.

Holland had a slightly different backstory. “I just saw one around the house, and I thought it was pretty interesting. I have seen people solve them before, [so] I thought it would be fun to learn how to solve,” he said. From there both members then went on to practice and perfect their Rubik’s cube skills.

From one-by-one to 13-by-13 cubes, each puzzle has a different level of difficulty. While the iconic three-by-three is considered popular among members of the Rubik’s Cube Club, there are multiple variations. “There are shape-shifting cubes, too, that change shape as you turn them. And then there are ones shaped like a pyramid called Pyraminx,” Holland said. His average time for a three-by-three cube is less than 13 seconds.

It’s a common misperception that Rubik’s cubes are extremely difficult to solve, but this club shows that it can be done with support. “It is really fun. Everyone is really accepting, [and] lots of different people show up. We have had some people who show up who don’t really know how to solve, and we teach them, so it is a really big range of skill and knowledge,” Holland said.