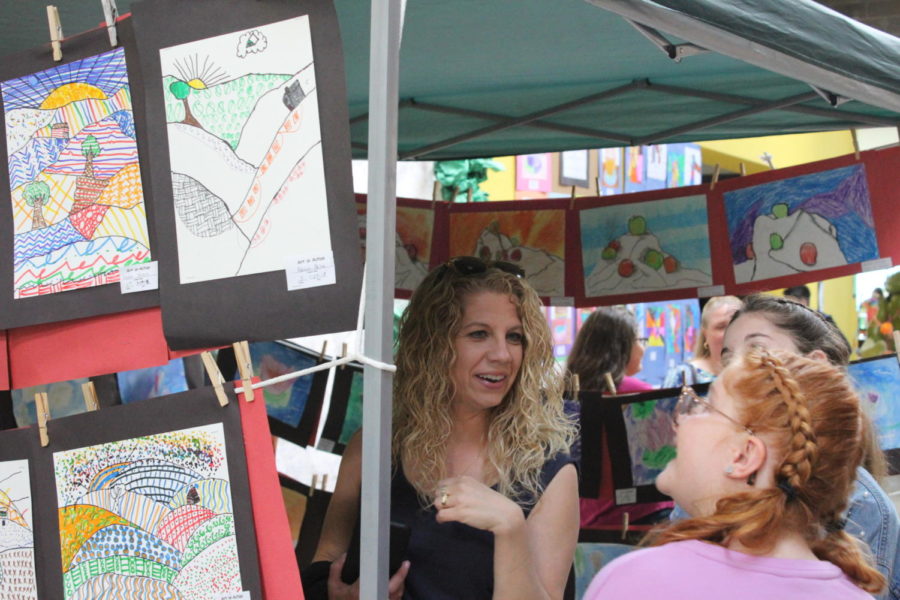 On April 7, the Spring Art Show showcased visual and performing art programs centered around the Willy Wonka-inspired theme “How Sweet It Is!”. Countless pieces of art made by the students were placed all around the CAHS campus for parents, students and teachers alike to view.

“The Drowsy Chaperone” cast has a tight-knit community that doesn’t discriminate against age or seniority in theater. “Our cast is super supportive …  there’s a lot of casts that could [have] some prima donnas, a lot of drama. [But] we’re all friends. Seniors hang out with freshmen; everyone is just kind of cool with each other,” freshman cast member Katherine Mosack said.

Each member of the play production group behind “The Drowsy Chaperone” has unique gifts. “I’m a high soprano, and in this show, especially, there are a lot weird, really high notes, and I was fortunate enough to be put on the high note with like three other girls, so I think that’s my biggest strength,” Mosack said.

Another performance showcased at the Spring Arts Show was that of the Caiman Crescendos, the CAHS Choir.  The choir, which consists of around 70 members, performed songs in front of a large audience, as well, despite members’ nerves.

According to sophomore Aaron Riddle, the most difficult part of performing in front of an audience is to not overthink the performance.

“[The most difficult part is] not looking stupid and not messing up, because even though I try to think about the song, sometimes I’m just like ‘Don’t mess up; don’t mess up,’ and then I mess up … it’s just hard not to mess up because you’re too worried about it,” Riddle said.

For some, the solution to overthinking a performance and stage fright is clear. “I try not to think too much about it beforehand; I just kind of go on stage and pretend … this is a normal rehearsal and the people who are here in the audience are here to support you. And [I] try not to think about the negative things,” Katherine Mosack said.

In addition to the other performing arts teams, the high-energy JV dance team, which placed second in hip-hop and third in pom, connected with their

audience a different way than they would in a competition.

Freshman Ella Granger, who has only been on the team for a year, has been performing for over five years.  According to Granger, one has to be “mentally prepared for it. You can’t psych yourself out.”

The JV dance showcase contrasted with their competition performances because “you have to connect with [the audience]  and you don’t always do that. At competition, it’s really easy because everyone’s from ‘Danceland’ there. But when you perform in front of the school a lot of people don’t understand it, so it’s harder to connect with them.” Granger said.

The CAHS Advanced Drama team demonstrated how in-sync they are both in and out of performances. Senior Sierra Weiss attributes this synergy to class-bonding ice-breakers and games. “What was really cool is that when the class started, we just spent a lot of time doing icebreakers so that we’re really comfortable with each other,” Weiss said. “It’s really uncomfortable when you start acting with people you don’t know. We just spent a lot of time breaking down those barriers and getting to know each other.”

However, when performing, Weiss says the most difficult part of performing is being exposed as a character. “I think it’s just that vulnerability with being … your character. Because when you become a character, you put so much of yourself into it,” she said. “And it’s just a thing that you created and you’re showing it to people.

“It was just such raw emotion … to have all that emotion play out to have the story be told in the way it’s supposed to be, and do the story justice. And taking off all barriers that you have as a person and  being in front of a room full of strangers, but then just being that exposed vulnerable character.”