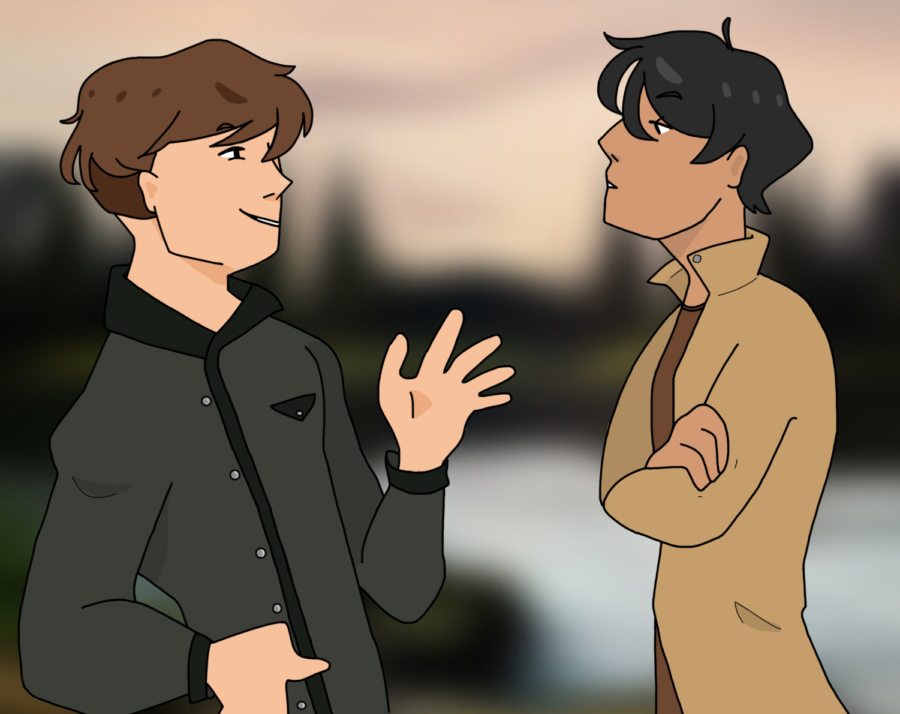 Syrio Dean and Blair Stevenson meet on the riverbank. Artwork by Savannah Salazar.

Each night Blair slept fitfully, constantly reminded that she was still gone from his life. He no longer shared a bed with her; he slept only with his guilt now. When he woke, he woke to a strange landscape.

They hadn’t even given her a funeral.

They considered it a mercy to not let him see the body again.

Maybe then he could’ve remembered her before she was wreathed in blood. He would never know now.

His new home was now a small hut with barely enough room for a bed and a furnace to stave off the bitter cold. He could never return to Mars. No longer could he walk outside and see fields of red dunes and towering scarlet mountain ranges. No longer could he feel the red winds.

His world was one of white now instead of red. Snow instead of dust stung his face when he left his bed. Few landmarks filled his view save sparse forests and frozen rivers.

When he could sleep, it was filled with dreams that haunted him when he woke. He refused to let her fade from his memory, but sometimes he wished that he could think of the times before they had fought, when they were truly happy with each other without having to remember her lifeless face too.

Every time he closed his eyes he felt the weight of her on his heart. Most nights he sat up in the middle of the night, tears drying on his face.

Most of the time he only sat there trying to fall back into some semblance of sleep, but tonight, there was no respite. The images still swirled in his mind, reserving no mercy for his sanity. He kept seeing her lifeless eyes staring back at him, surprise covering a mask of sorrow, questions of why printed on her cold lips.

A shadow always lurked behind her, taunting him before slipping out into the night. It asked him why he let her die, why he was too stupid to see the truth.

His bed offered no comfort tonight.

He quietly slid into his clothes, shrugging on a thick coat and a pair of boots, these ones not caked in the red dust of home. He quickly stepped out the door of his small hut, the cold hitting him like a brick, ripping through his coat and sinking under his skin to settle in his bones. The snow crunched softly under his feet, few prints marring the fresh snow this early in the day.

He started moving, trying to warm his already-numbing body. Dawn had come, but the sky was still dark, the sun just a pinprick of light this many miles away. The huts he passed remained quite still though, and his passing remained unnoticed.

He almost slipped on the frozen path, still unused to the cold and ice. He caught himself though, and continued south through their camp. He wasn’t exactly sure why he headed that way, only that he needed to walk somewhere, needed to take his mind off his thoughts and dreams.

To his right, mountains towered, cloaked in white. Dark forests ringed their bases, clutching the little ground that could hold them. The pines stood starkly against their snowy backdrop, standing sentinel against the cold wind whistling softly between their boughs. The mountains continued higher past the tallest trees, rising higher into the sky until the tops were barely visible.

He continued on, the sounds of water running over stone, of ice cracking and shifting, grew louder as he approached the southern end of the camp. Strangely enough, he could see another pair of footprints heading toward the river too, the prints fresh in the snow.

He followed their path, trying to think of something other than his wife. Soon, he passed the last hut and a sign marking the edge of the Wilderness, vast uncolonized stretches of land that separated the camps from each other. The river was just on the edge of it, rushing down from the mountains and heading further into the Wilderness after it passed the camp.

He kept following the footprints, eventually finding their source at the edge of the frozen river. He stood tall; brown hair messy and unkempt in the frigid winter air. It was strange to see someone as composed as he looked here.

He bent over on the rocky shore of the river, searching for something in the ground. He came up with a dark rock polished smooth by the rushing current. He flipped it in his gloved hand a few times before throwing it out across the river. He stayed like that for a moment, just watching the rock skip across the river before finally falling beneath the surface.

He walked to the riverbank, wondering what it was like to not be plagued by nightmares.

He picked a rock from the ground, but all he felt was anger and grief. Gripping the rock in cold hands, he threw it as far across the river as he could. Maybe it would take his memories with it. It flew almost to the other side of the river before hitting the river and sinking below the surface, just as the other had before. And still he stood there, angry and alone.

“That’s not exactly how that works, but I’ll give you points for effort.” The source of the prints commented.

The stranger beside him bent and picked up another rock as he spoke. “What’re you doing out here this early? I’m usually the only one up right now.” He threw the rock across the river again. Watching as it skipped across the dark, flowing stream.

For some reason he felt like talking to this stranger. He drew comfort from the seeming plainness of the man that stood beside him. And yet that same regularity sparked his curiosity when found in a place like this.

“I’ve got a lot on my mind.” Blair said out of the corner of his mouth as he picked up another rock as well, hoping this one might be able to take the grief from his shoulders. He threw it as hard as he could, but still he seethed. The river swallowed the rock, but he could not swallow his anger no matter how hard he tried.

“Don’t we all.” The stranger smiled at him as he picked up another rock. “Why do you think I’m up this early too? Helps clear my mind.” He skipped the rock; this time it almost reached the other side of the river. His smile got a little bigger.

“And what am I supposed to call you? I don’t think Skipper would work very well.” Blair hefted another rock, but try as he might, he could get no closer to the opposite bank.

The smile lingered. “I prefer Syrio Dean.” This time as he threw the rock across the river, it bounced along the surface until reaching the other side. “Although Skipper is rather fitting, isn’t it?” He smiled even wider.

He seemed done throwing rocks after that, so Blair set his rock down as well, and turned to Syrio.

“My name is Blair Stevenson and it seems you’ve got me beat here.” He grabbed his hand and shook it.

“Sometimes brute force isn’t always the way to go there, Mr. Blair. Glad to welcome you here to sunny, out-of-the-way Pluto. Where we’ve all got our secrets, and half of us are crazy.” He smiled at him, but Blair saw something else in his eyes. His gray eyes were cold compared to the smile that rested on his face.

He wasn’t only being friendly. Everybody here had their secrets, their dark sides. Everybody was here for a reason, and Syrio had his reasons too. Blair just didn’t know what it was yet.

Blair left Syrio to his rocks as he walked back to his hut. The sun had risen higher while they were at the river, little difference that it made on his surroundings.

Meeting Syrio at the river had only made him more frustrated at being here. The days would go on and the sun would continue to rise over the mountains and yet Blair would wake up each morning sweating in the cold. His wife would never come back, no matter how far he threw a rock.

As he opened the door and started slipping back out of his clothes, he felt hopeless and lost. The tears started falling from his face again, as they did most nights, coming unbidden as they fell from his cheeks to water the stone at his feet. Tomorrow would be the same, and the next sun would rise and it would make no difference to him. The day would go on and he would have to go on with it.

One long, heavy step at a time he could keep walking through life. Maybe one day he would be able to run through life like he had with her.