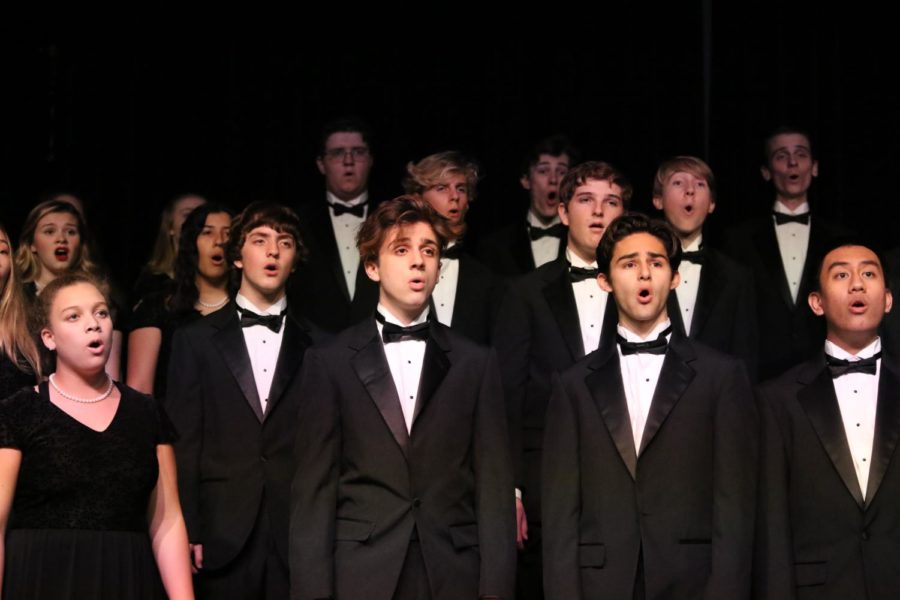 On Friday Dec. 7, Choir held their Winter Choir Concert. Some of the songs performed include “A Swingin’ Christmas”, “You’re a Mean One, Mr. Grinch”, and even “Bohemian Rhapsody”.

But the concert was not easier said than done. “There is quite of a lot of work that goes into these choir concerts,” senior Timothy Chang said. “The students meet on Mondays and Wednesdays for a total of three hours per week,” Chang said.

“I think it’s hard for people to understand it might not be modern music we are singing or the music people would listen to on a daily basis [but] it truly is beautiful— and it takes so much work to put it together,” sophomore Lindsey Rappaport explained. “A lot of people at school don’t know that we won Unanimous Superior for the last … four years at competitions, and we work so hard but a lot of people don’t really know that.”

Many of performers also did solos. Aidan Conant Guy, a senior, sang “Balulalau” by Peter Warlock. “[You’ve] got to be confident when you’re singing because if you’re the quiet type or the shy type, then it’s not going to come out as well because it sounds kind of shaky … You [have] to put yourself out there because otherwise it’s going to show that you’re nervous,” Conant Guy said.

Rappaport, Conant Guy and Chang sang, along with the rest of the choir, songs such as “Light in the Hallway,” which had students hold flashlights while the room was unlit, with the exception of a projector showing candles burning. During the song “Bohemian Rhapsody,” color lights were projected, and there were two solos within that one song, one by Chang and one by sophomore Hunter Smith.

“When I first started I was a soprano in second grade and I didn’t really know anything about singing, so I actually think that everything I’ve learned about singing, how to blend in with others, how to cite read again and all the other small techniques, I’ve learned through choir and some voice lessons” Conant Guy said. “I love the community, I’ve actually been in choir for 12 years, and the reason I keep coming back is, it’s cool how everyone is so passionate about singing …”