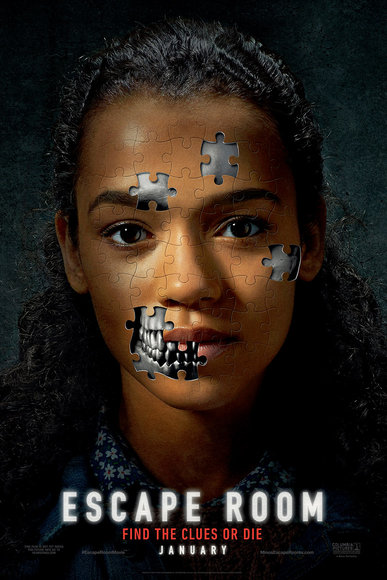 “Escape Room” follows six strangers who travel to a mysterious building to experience a game where participants work together to solve a series of puzzles with the hope of leaving $10,000 wealthier. What begins as innocent fun quickly turns into a disaster as the four men and two women find that each room makes up one sadistic game of life and death.

I’d like to start off by establishing that I would rather watch an animated musical for the sixth time than the newest hit thriller. I’d also like to note the theatre’s grand total of three audience members.

Needless to say, the film started off humbly.

But I found myself rooting for the characters. Because the theatre I was in was so desolate, I was free to shout “go!” or “run!” along with the cast. The movie does a good job of introducing them and I felt like I got to know them as much as possible, considering it’s such a big group and there are only so many flashbacks one can handle in one-and-a-half hours. The film was careful not to reveal so much from their pasts so quickly that would hint too much at what would happen in their future.

The first lead, Ben, is introduced abruptly when the movie throws us all for a loop right in the first few seconds by beginning at the climax of the story where he doesn’t look too good. Don’t worry, though. After a good scare, you get to see the actual beginning of the story, where Ben is an alcoholic and a smoker who’s just been denied a promotion.

We also meet Zoey, a college student with a lot of potential, but she can’t bring herself to voice her ideas. Her professor tells her to try something that scares her over their Thanksgiving break to help her find her voice. Little did he know, he was setting the scene for a PG-13 thriller movie. Literally.

And we meet Jason. In stark contrast to the other two leads, he has a good job with an assistant and a fair amount of confidence. I should also mention that he has a rich friend that sent him a mysterious box. You guessed it: that’s his key to the escape room. Zoey and Ben are sent boxes, too, and they’re off to meet the other half of the cast.

Ashley has scars from her military background. Mike seems like an honest, American man who can’t seem to stop talking about himself and his family. Danny, though a bit nerdy, is an escape room veteran and turns out to be very useful with all of his experience.

This was a very character driven story, and I liked how well I understood each person’s motives. I also think that the casting was done very well for the most part. The main six actors really pulled off the survival mode instincts for each character. There were a few minor roles, however, that didn’t work for me. The college professor in the beginning and a few others in the end that were reading the lines without delivering them— but that may be the theatre nerd in me.

But the movie didn’t just ride on characters: the thrill element started strong. When trapped in a room where they can’t help but trigger more and more heat lamps, they’re desperate for the cold that later threatens their lives as they very quickly find themselves in an icy forest with only one coat. The game also used specific memories from the characters’ pasts against them. The movie didn’t use ghosts or demons, but rather more realistic fears— natural elements, survival and an uncomfortable feeling of being watched.

Overall I was pleasantly surprised. This movie was perfect for people that enjoy mysteries, puzzles and clever twists.