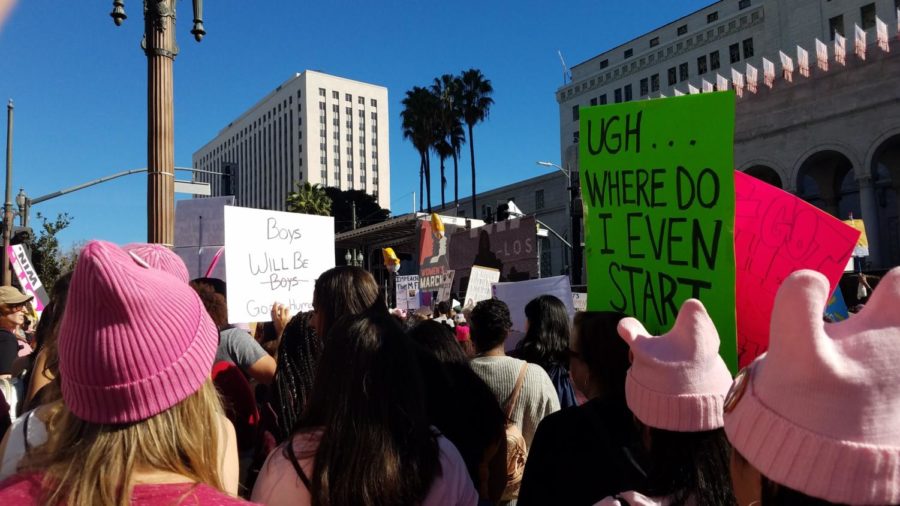 On Jan. 19, thousands of people crowded the streets of Los Angeles and marched towards Town Hall. It was the third annual Women’s March, and the excitement of the first march was still there. That day, over 100 marches all around the nation were held. Men and women alike marched together, signs in hand, pink beanies on their heads. Adults, teenagers, children— even pets— were participating in the protest.

Although the march is held on the anniversary of The President’s inauguration, this is not the only topic being protested. The march is held in protest of everything from homophobia and transphobia to racism, sexism, and as per the name, women’s rights.

One of the most phenomenal parts is simply the people. So many people of different ethnicities, sexualities and genders were gathered to have their voices be heard. Whether it be chants or the very creative signs, each with different messages. Vendors walked around with pins, flags and t-shirts for those who didn’t bring signs or wanted to show a little more enthusiasm.

The amount of people there is overwhelmingly impressive. It’s amazing to stand with that many strong, like-minded people. It gives you this incredible feeling of empowerment. This feeling that you’re doing something so important. Like you’re really making a difference.

It’s an incredible feeling to take the time to talk to some of the people there. Complete strangers who have such great stories to tell about why they’re there. About what needs to change. So many different people, but each with a unique cause. This moved me, seeing all of those awe-inspiring people out there marching gave me a feeling of hope. And because of that I will never forget this experience.