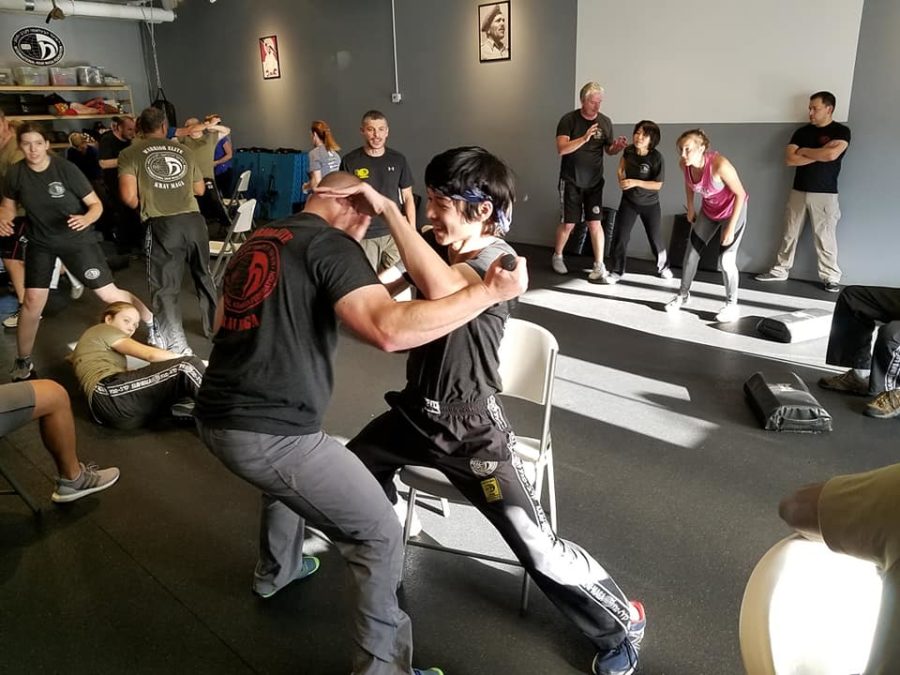 Choy grapples with a partner at his krav gym. "I accidentally did something wushu-esque," Choy said.

When it comes to martial arts methods, moves or mindsets, senior Nathan Choy has explored them all.

As a kid, Choy was encouraged to maintain an active lifestyle, and soon he developed a deep love for martial arts, starting at Jing Institute but moving through different styles as he saw fit. “I found martial arts through some friends of mine. It’s called wushu— modernized kung fu is the simplest way to put it. I moved on from there; I did fencing a little bit … I went back to the wushu place… did half a year of pretty much kickboxing, and then I did krav maga for two years,” he said.

“Some martial arts will emphasize more of ground technique— so you’re more on the ground wrestling someone— that’s always fun when you have a 200-pound man on top of you. Others will focus more on staying on your feet and trying to move around and not getting in that situation. And then there’s different emphases among those: some people do strike and come out in more of a boxing style, landing hits and getting out of the way so you don’t get hit. There’s also some more Chinese styles that focus on disabling the opponent, grappling but standing— I call it more trapping.”

Choy finds learning about physiological aspects of martial arts fascinating, as he explains. When the leader of a krav maga organization came to teach, Choy had a question about how to respond to someone pushing you. “Normally we respond with moving the hands and fighting back… [but] he pushed my elbows inward and locked my arms straight, and he’s like ‘now try pushing me,’ and it was the weird body mechanic because there was no strength from the triceps pushing in. I love the body mechanics and how human beings work… It’s a weird science and art all meshed together for me.”

It’s not just the physical demands of martial arts that are daunting, however; Choy emphasizes the mental barriers he has had to overcome. “What has been challenging for me, and especially with krav, is overcoming the idea of hurting someone and also getting used to being hurt. Especially with combat … you are trying to injure someone, be it punching their face, break their arm… At the same time, they’re trying to hurt you or kill you. So that takes some emotional somersaulting.”

He pauses, nods and then repeats, “It’s still very weird for me to think that I am going to punch this person in the face.”

Choy has always preferred combat-based martial arts to more performative kinds. “There’s less set routine or form you have to do, and more of just accomplishing your goal. I’ve always been more focused on the combat side… but I’ve come to appreciate the art side more as I grow older.”

Ultimately, Choy most enjoys his own mixed martial arts combinations. “My krav gym was nice… It was more MMA-focused in terms of what we focused on because we had standing stuff, kicking, boxing, a little bit of wrestling and ground fighting stuff like jiu jitsu, and also a little bit of weapons stuff which is fun.”

Choy believes that martial arts have helped him with self-control, situational awareness and confidence. And while he isn’t sure what he will do in the future, he is certain that martial arts will be something he continues avidly on his own. “I’ve come to understand that martial arts tend to be kind of a philosophical thing, in how you see yourself and the world, in some ways. It becomes a part of you. And it doesn’t have to take over your life per say. I don’t anticipate becoming the next Jackie Chan or whatever; I just enjoy it.”