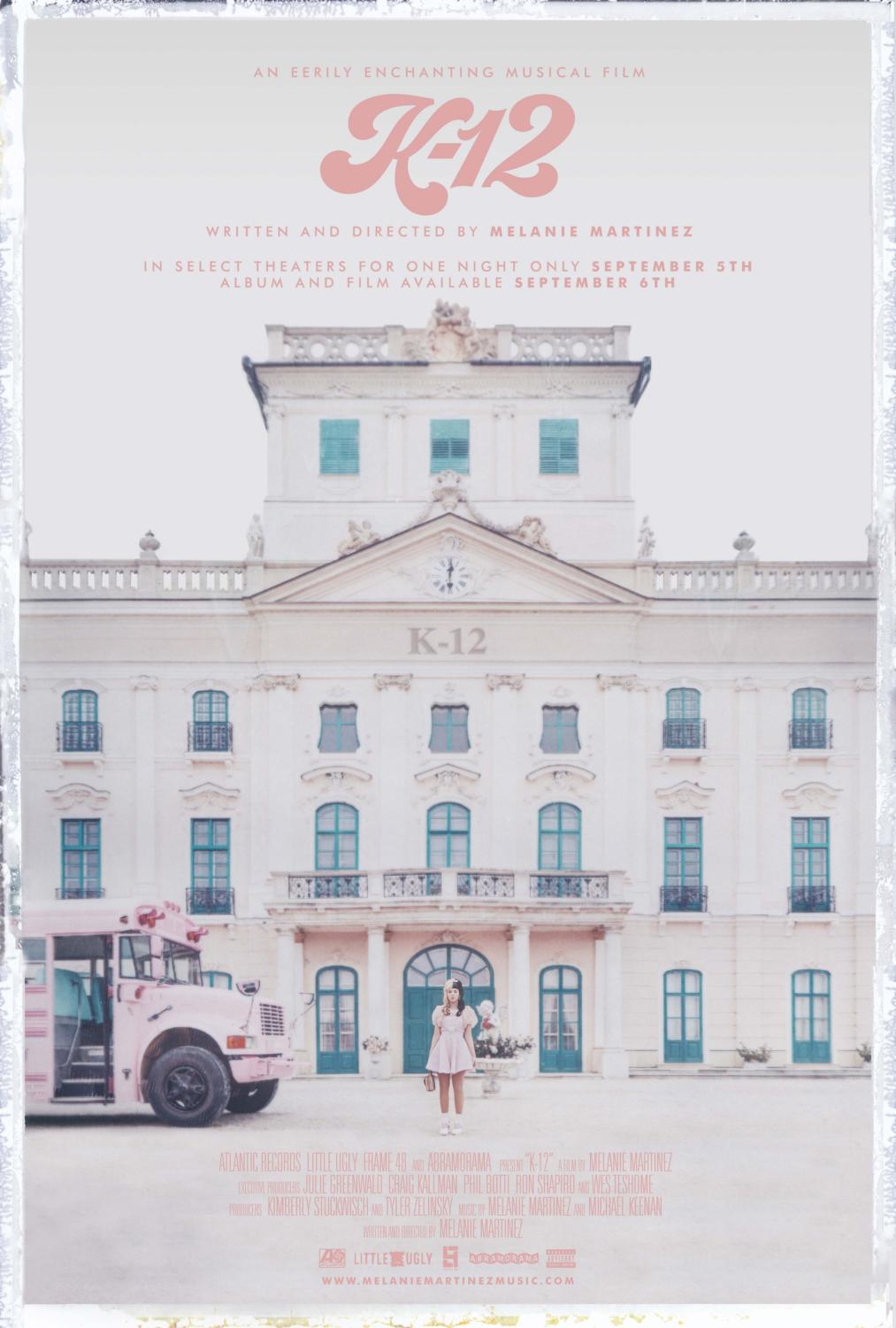 K-12, Melanie Martinez’s second full album, was released on Sept. 6, 2019, along with a full-length film by the same name. Melanie Martinez is an American singer/songwriter who produces mostly alternative pop and indie pop music. She rose to fame in 2012 after appearing on The Voice, releasing her debut single “Dollhouse” soon after. The movie, K-12, is Martinez’s first venture into the film industry, and she has said a sequel is in the works. There is no official rating yet but it is a fantasy/horror with numerous profanities both in the music and spoken by the characters. The overall aesthetic of the movie is pastel goth, almost Tim Burton-esque, something that is very reminiscent of Martinez’s music videos. After considering it, I give K-12 an 8/10. I do recommend this movie, but keep in mind that it is in no way family-friendly.

The movie follows Martinez’s character, Cry Baby, as she and her friends struggle through the grades of K-12 Sleepaway School. They all have powers that allow them to manipulate almost anything, but not much explanation is given as to how they got these powers or what the powers are linked to. Together, they uncover the dark secrets hidden behind the school’s cheery facade, and work to take the school down once and for all.

On the surface, K-12 seems like a twisted pastel story marketed towards teens and young adults, but there is so much more to this movie than the plot. It is Martinez’s way of satirically showing her point of view on issues such as #MeToo, eating disorders and body image, fame and fake or sometimes toxic friends. Each one of the featured songs covers a different issue, so it doesn’t matter whether you are watching the movie or listening to the soundtrack; the message will reach you. “Wheels on the Bus” speaks to an issue that some students can relate to: the feeling that what they have to say doesn’t matter, and that no one is listening to them. “The Principal” is about a principal who cares more about money than the students he is in charge of, exemplifying the idea that power corrupts. “Show and Tell” is Martinez’s perspective on her fame, where she says that she feels like she’s “on display” for people to see. Two of her songs talk about drama and fake friends: “Drama Club” and “Lunchbox Friends.” One song that really struck me was “Orange Juice,” a song about self-image, particularly bad self-image, and how it could drive some to develop eating disorders.

K-12 was, overall, a great movie, and 97% of Google users agree. At times, however, it seemed like the plot was a secondary thought, with the main focus being the music. The plot was slightly underdeveloped, with a few time jumps I found confusing. The characters didn’t seem to develop much either, and they were all very one-sided. The “bad” characters had no redeeming qualities and the “good” characters were presented as working for the greater good. Considering the little acting there was it was fairly good, but I wish there had been more opportunities for the actors to show their skills. The lighting and set design were beautiful, and although there were some darker lit scenes, you could still tell what was going on. When I reached the end of the movie, I was upset that it ended on a cliffhanger. Martinez has not yet revealed when she hopes to release the second installment. I thought that K-12 was worth watching, but I’d never rewatch it. In this case I think that the sequel has a chance to be better than the original. The K-12 movie can be found for free on YouTube and the K-12 album can be found on any music streaming platforms.