Cinderella 2021: A Fun but Disappointing Movie 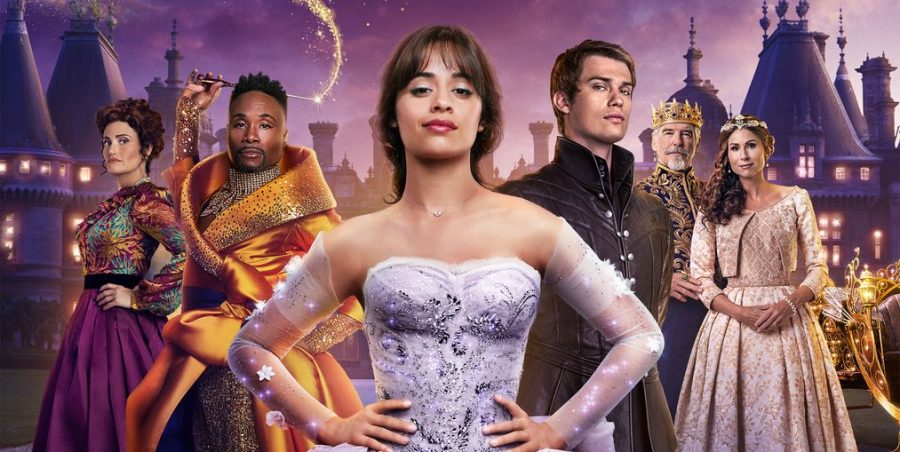 In this “new” spin on “Cinderella”, our main character Ella is a dressmaker in a female oppressive world. During a changing of the guard she disgraces the king and her own step-family, catching the rebellious prince’s eye. He hosts a ball and through the help of her “Fabulous Godmother”, she is able to attend on a crate with some mice. She is approached by a Queen who asks about her and offers her a job if she can show her more designs. She and the prince have a dance and runs at midnight. After she learns she is be to wed to a lord she’s upset and hides in her very nice well-lit basement. Yes. Basement. Her step-mother comes to check on her and discovers that she is the maiden from the ball and tries to convince her to marry him, though she would lose her dreams of being a seamstress. She refuses and is sent to marry the lord and on the way she jumps from the carriage. She meets up with her prince, they reconcile and then she meets the Queen. The couple decides to travel the world and not stay in the royal court.

This movie is jam-packed with all-star actors, ranging from Broadway legends Billy Porter and India Menzel to film stars Pierce Brosnan and Minnie Driver. When it comes to performances, the supporting cast seemed to upstage the leading duo, Cabello and Galitzine. Though James Corden held a gun to the producers’ heads to be put in the supporting cast, some outliers include Tallulah Greive as Princess Gwen and Charlotte Spencer and Maddie Baillio as the Stepsisters.

Grieve, while being subtle, or “not subtle enough?” as she says in the film, stole most of the scenes she was in, making her the reason for most of the laughs. Spencer and Baillio also added a few laughs with some fun lines and moments though a lot were at their own expense. Porter shines in his few moments despite being in much of the promotional material for the few minutes of screen time. Menzel’s Stepmother holds the mantle of the best written character in the movie with a complex backstory, motives, and killer vocals.

Celebrification is a term used in the film industry, mainly for animation, in which a character is written to match a celebrity— like Will Smith in Shark Tales— unlike a classic film where an actor gets chosen because they match the character. This is something that came across with Cabello’s character Ella. Cabello has a very modern pop voice that sounds almost child-like and she’s a very humorous person which kind of overtook her character. She also was very involved in the movie apparently to the point where she cause multiple changes.  While most of the music in the movie is from the 1970s, 1980s, and 1990s, her songs are more modern from the 2010s and some of hers are original song that sound like a song you would hear on the radio.

For the most part, the music in this film is pretty well-chosen, and the new arrangements suit the vibes with Pop-Rock music from the 1970s through 1990s. Some of the classic songs included on the soundtrack are Janet Jackson’s “Rhythm Nation”, Queen’s “Somebody to Love”, and Madonna’s “Material Girl”, all of which are updated to fit the style of the film. Out of the thirteen songs excluding reprises, there are five new songs. Three of these songs are for the character of the Town Crier and to give information to the audience. These small rap numbers performed by Ben Bailey Smith stand out from the rest of the music, but all are decent additions to the soundtrack. The ‘theme’ song of the movie is an original song called Million to One that Cabello sung and helped write, yet it doesn’t fit the rest of the music since its very poppy. The final original song is a fun villain song for Idina Menzel’s Vivian, which matches the movie’s style perfectly and lets Menzel shine, though she holds a singular note for a long time.

This movie is on the top of my list for Academy Award nominations when it comes to costuming. Ellen Mirojnick brought her experience in costuming for “Bridgerton,” “The Greatest Showman,” and the ’97 Brandy “Cinderella” to put some of the best (and some far from best) outfits together. A great example of this exemplary costuming is all the various Princesses ball outfits during the iconic number “Whatta Man.” Some of the other costuming pieces that aren’t as nice, some of which belong to Cabello’s character Ella. Besides about five seconds during “Am I Wrong?” she has the same braid the whole movie. It’s messy and doesn’t compliment her character well. Also, many of her dresses are one shoulder in the film, which doesn’t fit with the style of the other dresses shown.

These are some of the best pieces of costuming in the movie. Some other fun visuals are due to great cinematography, which also shines in the ball scene. Towards the end of the quickly becoming iconic “Whatta Man/Seven Nation Army” mashup, the princesses start going crazy over the prince, and the camera angles help to show this off with short snappy and up close shots. It even gives off Moulin Rouge club energy.

Now the arguably most significant flaw to this quickly iconic and questionable movie is its writing. Much of the dialogue seems clunky, and most of the lines that don’t, aren’t delivered very well. When it comes to the few excellent pieces of dialogue, they are for the supporting characters and subplots. Vivian and Princess Gwen both have pretty good writing, and on my third watch for this article, I realized that I was more interested and invested in the subplots of Vivian’s backstory and the Royal Family’s interrelationships. They seemed to have been written with more thought than the main plot of Ella’s and Robert—  the Prince’s—  relationship, which had multiple plot holes.

My final thoughts about this movie are that if you are a theater kid, or if you want to put something on in the background for some fun audio and visuals or just turn off your brain for two hours, it’s a great movie. If not, it’s probably about a 6/10 with fun costuming and styling, questionable dialogue, and interesting song choices.