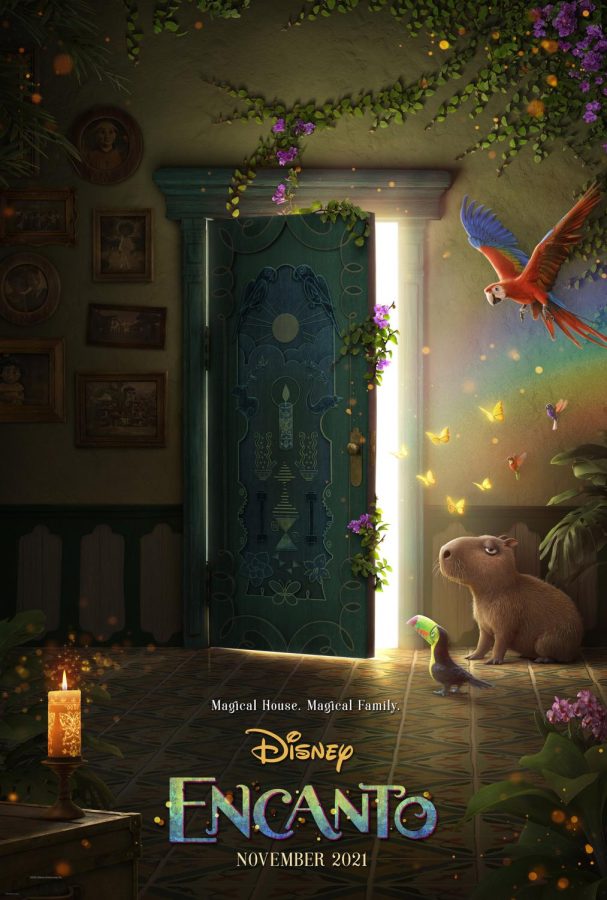 The hype began with an overwhelming barrage of Spotify ads. The users of free streaming services were suddenly bombarded with colorful trailers and loud music. This left a mixture of skeptical and excited people when the release date was revealed. Thousands of people crowded the theaters on Thanksgiving, and later huddled on the couch while watching it on Disney+. The film `Encanto” was spread like wildfire through the media and grew increasingly popular, but is it actually well done? At a rating of 90% on Rotten Tomatoes, “Encanto” is rated surprisingly high for being only a few months old. Following the success of fellow Disney movie, “Luca,” which came out in June 2021, Encanto received a lot of hype. It seems that Encanto is pumped up by the media, but how good is it really?

The plot of the film follows the eccentric Madrigal family and their life in their magical house. Each member of the family, except for the main character Mirabel, has supernatural abilities. The magic of the house and the family’s powers are possible because of the magical candle the family possesses. Suddenly, the magical candle starts to reach its limit, and the Madrigals panic, setting off the conflict of the movie.

In the context of the film quality itself, the animation and soundtrack is stunning. With lush, vibrant colors and special effects, Encanto’s visuals capture the personality and style of each character as if it was a live action movie. Lin-Manuel Miranda, the writer of Hamilton, wrote the soundtrack for this film. The most popular hit, “We Don’t Talk About Bruno,” which hit number one on the Billboard Hot 100 charts (surpassing “Let It Go” from Frozen!), as well as the rest of the soundtrack scattered through the film captures the plot and personalities of the characters perfectly. For example, the opening song of the film, “The Family Madrigal” covers each character’s powers and personalities in a creative yet catchy manner. When it comes to the powers themselves and the individuals who have them, Encanto’s soundtrack also delves deep into each character’s thoughts and insecurities (such as “Surface Pressure” and “Waiting on a Miracle”) as well as the family’s past (like “Dos Oruguitas”). I myself hate musicals with a burning passion, and yet I thoroughly enjoyed this movie and its soundtrack because of its incorporation into the plot.

Encanto presents the audience with quirky, unique characters and an engaging plot, but the most surprisingly effective aspect is the lore. There is an overwhelming fog of mystery surrounding multiple areas of the film, such as the apparent lack of a villain and why the magic in the candle was dying. While an air of unknown can enhance a movie if presented properly, the mountain of holes in the plot are sometimes confusing. However, it seems that these so-called “errors” were intentionally scattered throughout the film, to enhance the real purpose.

Spoiler warning from here on out!

To elaborate, the magic candle is mysteriously gifted to the grandmother of the Madrigal family, Abuela Alma, directly after the slaughter of her husband during the Thousand Days War. She hurries to the magical shelter that the candle provides, along with her infant triplets. The trauma of her dead husband, as well as the burden of caring for three children alone, slowly turns Alma into a cold, strict human being. Later on when she is expected to host an entire town of people, she greets the villagers with a warm attitude but scolds her grandchildren to be perfect in every way. This causes her grandchildren and her to have a tense, uncomfortable relationship. This tension becomes more apparent when Bruno is introduced into the film, revealing his real reasons for leaving the family (their protection and happiness). This points to an overarching theme in the film that is hidden in every song, scene, and line: generational trauma. The result of Alma’s pain spread to her children and grandchildren, which is why all of the siblings are constantly in some sort of conflict.

In conclusion, Encanto is certainly the film of 2021. It propels the audience through the emotions of each character, the plot is well presented and the visual effects are stunning. The message of the film is relatable and deep, but not too dark for younger audiences. Encanto’s soundtrack compliments and enhances the film, rather than distracting the audience from the plot. Though skeptics may point out supposed ‘mistakes’ they most likely are missing the true purpose of the film: the healing of a family from generational trauma. The film isn’t supposed to have a villain arc, it is supposed to reconcile a conflict that was already there from the beginning of the movie. No film is without error, but nevertheless Encanto is close to perfection.